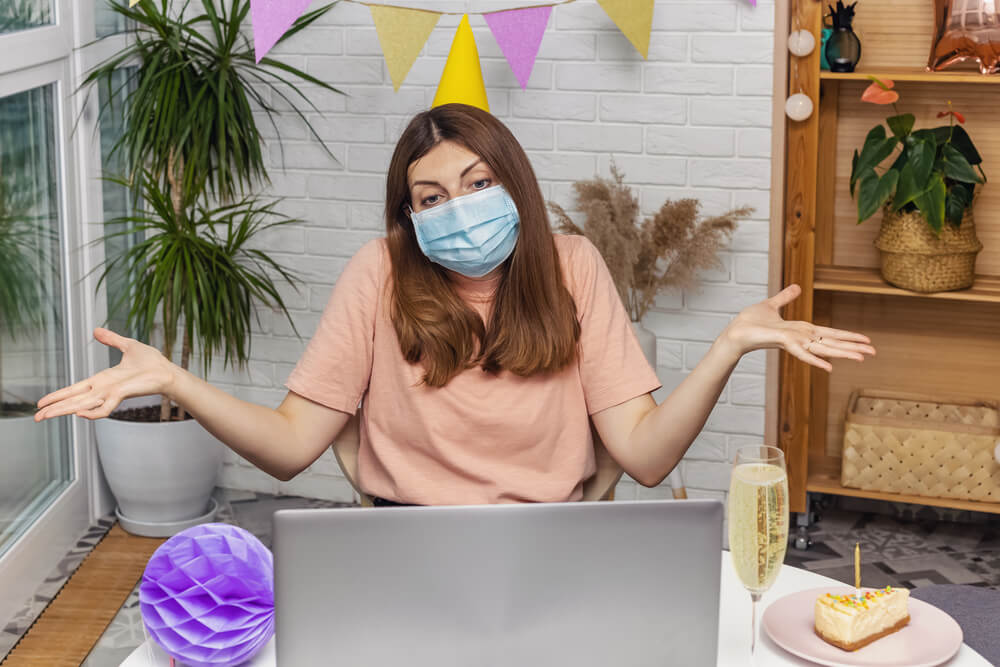 Seriously, let the games begin.  We don’t know if you’ve been to any Zoom (or other online hosting platform) parties since the pandemic begin, but party planning makes an even bigger difference online than it did for in-person parties.  It can be difficult for parties to unfold organically when handled remotely, so planning is very important.  These games will help you establish an itinerary for the party.

Never Have I Ever

A perennial bachelorette party favorite, Never Have I Ever is like a naughty version of truth or dare, without the dares.  There are a bunch of different ways to play it, but basically people take turns saying “Never have I ever ____________.”  If a person has done the activity, they take a drink.  The most common version of the game we have seen has people holding up five fingers and then putting one down each time they take a drink.  The first person to have all five fingers down is the “winner” of the game.  Alternatively, the person with the most fingers up when the first player runs out of fingers could be the winner.  We love this game, but it can get pointed and a little bit mean depending on the bride’s group of friends, so keep that in mind when planning it.  We also suggest adding it to the beginning of the night because drinking games can get super sloppy at the end of the night!

Which person in the bride’s group of friends knows the bride the best?  Presumably, if you are planning the party, you are the bride’s real BFF, so you help come up with questions and emcee the game instead of playing along.  Come up with a list of 10 to 25 questions about the bride and ask the partygoers.  You can play trivia games in tons of different ways- people shouting out the answer, going in turns, breaking into teams, people writing down their answers and sharing them at the end- so customize the how to what you think will work best for your group. 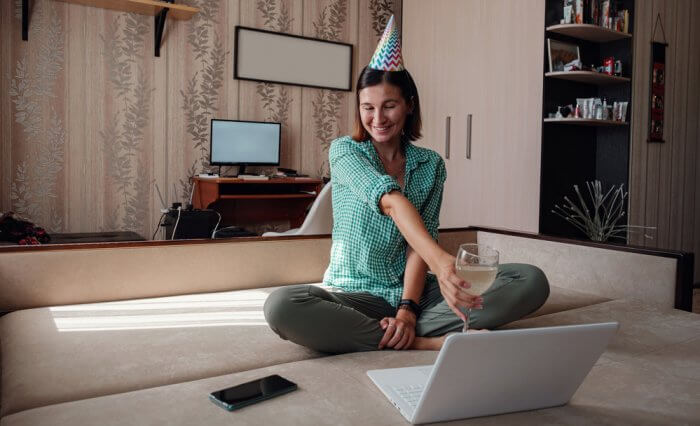 This game is less group participation, but can get pretty hilarious.  Ask the groom a list of questions.  Some of them should be a little racy and have the potential to make the bride blush, but omit any questions where his answers would do more than cause mild embarrassment to the bride.  Ask the bride the same questions at the party.  She gets a point for all of the questions she collectively answers.  Give each of the party goers a question (and the groom’s answer) so that they can ask the bride and judge the answer.

Cards Against Humanity has quickly become a classic party game for adult gatherings because it is funny, irreverent, and forces most people a little outside of their comfort zones.  There are several ways to play the game online, though the official game does seem capped at 6 players at a time.  Never fear, there are several similar games you can play in an online environment.  A similar game that was actually created to be played online is called Remote Insensitivity.

If you think Cards Against Humanity is too nice and impersonal, then Bad People might be the game for your group of friends.  The premise of the game is that you draw a card with a descriptor that is “bad” and bad can range from someone doing a relatively harmless naughty activity to full-out awful.  The other players then vote on who is most likely to have done what is on the card.  There isn’t an online version that we could find, but you can download the game for free from their website, so that all party participants could print out their own copies and easily play along.

Do you remember this classic game where you roll a die, get a letter, and then are challenged to come up with 12 things that start with that letter.  Bonus points if you can use multiple words with the same letter to describe something (frozen dessert that starts with s- sorbet, bonus would be strawberry sorbet, etc.).  You can play the game as it is created or get creative and make your own with a bachelorette party theme.  Here are a few ideas for categories: honeymoon destinations, wedding flowers, cocktails, sex toys, cake flavors, something borrowed, something blue, something old, something new, wedding dress colors.  You can also substitute in the letters of the bride’s name, the groom’s name, the bride’s new last name (if she is changing it), or the word “love” for the die-roll letters.

Everyone knows how to play charades, which is one of the reasons it is an enduring party classic.  To play this game online, you play it exactly like you do in person.  The are two versions- team charades where two groups compete against each other for points or just charades for fun.  The only challenge in a virtual charades game is getting the clues, but the person running the game can send the clue to the actor in a separate chat.

Who doesn’t love a bachelorette party scavenger hunt?  Back in the good ole’ days, when we could head out to the bars and have a naughty scavenger hunt, they were a great way to break the ice and to pull everyone in the venue into the bachelorette party.  Obviously, things are going to be a little different in an in-home environment, so you want to think of things that the partygoers are likely to have at home, but that might still be challenging to find.

Another game that people love because everyone knows the rules, bachelorette bingo is easily adapted to an online party format.  You can play it as a stand-alone game with someone drawing things for each space and use a generic bachelorette theme for your squares, or you can customize it to an online environment.  What things happen on online parties?  Wi-Fi problems, interruptions by pets/partners/kids, someone has to go to the bathroom, someone’s camera isn’t pointed at them, etc.  When one of those things happens, people check off their bingo cards, making it a game that runs the entire party (or at least until someone gets a bingo).

Never heard of it?  That is because we made it up for a recent bachelorette party because the bride-to-be is in love with romantic movies and Hollywood glamour.  It is basically a trivia game that focuses on two types of questions.  We asked trivia questions about Hollywood’s hottest “it” couples, both modern day and in Hollywood’s golden era.  We also provided quotes from romantic movies and challenged people to name the movie.  The party attendees loved the game so much, we think we had them at hello.

Just remember to plan ahead.  If your games are going to require things to play them, and many will, you have a couple of routes.  You can send every party guest a list of items that they may need (paper, markers or pens, printables from websites, etc.) to play the games and count on them to get them.  The problem with that approach is that we almost guarantee you that someone is going to drop the ball.  They are going to forget, or their printer will be out of ink, or some other excuse.  Instead of counting on people to have the right supplies on hand, send out packages to the party guests beforehand.  They can match the party theme and include all of the items that they will need to play the game.  If the party is supposed to start at 7pm and people are scrambling around to have things in order when it starts, the games won’t begin till at least 7:30pm and you will have lost a bit of the party feeling.  Don’t let this happen to you; assume everyone else is going to be incompetent, plan for it, and be pleasantly surprised when they are not. 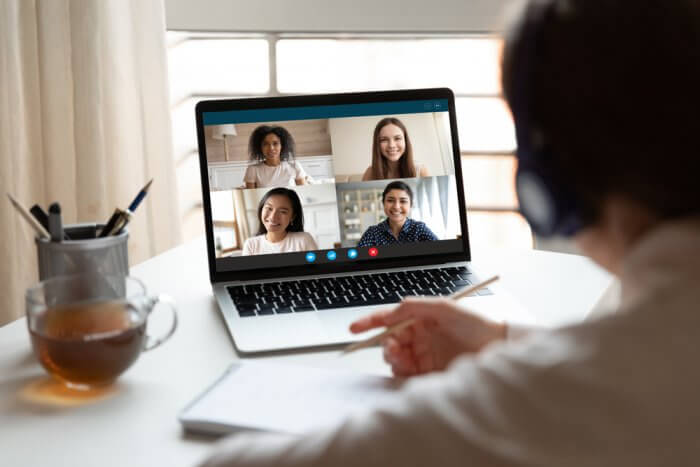 As you can see, there are a bunch of great games that can easily be adapted for a virtual bachelorette party.  While we listed some of our favorites, we have found that most group party games can be adapted to online, but you want to think about the mechanics of game play before adapting it.  Do people need pieces to play the game?  If the answer is yes, unless you can find an online host for that game, it probably will not adapt well to a large group online environment.  If you are not sure about it, run a playtest with some friends to see how it translates. Jackbox is a great resource if you are looking for games that are designed to play online.

Is an online bachelorette party going to be the same as an in-person party?  No.  Anyone who has attended a Zoom party over the last several months knows it is not the same as seeing people in person.  That said, planning a great bachelorette party online is a wonderful way to celebrate the bride and this tremendous life-change, despite the challenges of 2020.